Chris Mizelle has been named WYSA Director of Soccer 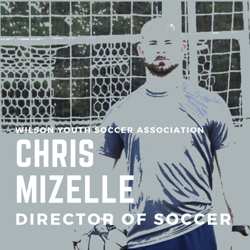 Chris Mizelle has been named as Director of Soccer for the Wilson Youth Soccer Association, beginning his duties on February 1. He transitions to this new role after serving as Associate Executive Director of the club since June 2018. As Director of Soccer, Mizelle will oversee all programming offered by the club with management of the coaching staff, player development curricula, club finance, and operations falling under his direction. Multiple program directors are slated to be named in the coming weeks to assist in staff management and player development.

Mizelle began his tenure with WYSA in May 2013 as a youth staff coach before being named President of the WYSA Board of Directors in June 2014, a position he would hold for four years. In his time with WYSA, he has worked with both boys and girls teams with multiple teams having been division winners and earned various league promotions. He currently is slated to work with the '03 Boys for the spring 2020 season.

In addition to his work with WYSA, he has worked as the Head Men's Soccer Coach at Fike High School since May 2014, with his teams earning multiple Big East Conference championships, both in the regular season standings and in the conference tournament. In December 2019, he was also named as the Head Women's Soccer Coach at Fike. He also serves as  chair of the Physical Education department at Fike as well as being a Regional Chairman for Men's & Women's soccer for the North Carolina Soccer Coaches Association.

Mizelle attended and played in the collegiate ranks at Barton College, graduating magna cum laude with a degree  in Secondary Education in December 2012. He has been active in his professional development throughout his coaching career through both US Soccer and the United Soccer Coaches Association (formerly National Soccer Coaches Association of America). He currently holds a Director of Coaching Diploma and an Advanced National Coaching Diploma from United Soccer Coaches in addition to certification as both an Advanced Youth Coach and Youth Club Administrator from the organization. Through US Soccer, he has earned a National D License as well as a National Goalkeeping certification in addition to being a Certified Interscholastic Coach through the National Federation of High School Athletic Associations.

Mizelle and his wife, Ashley, currently reside in Wilson with their newborn daughter, Adeline.